There has been organised football in Denia since the early 1920’s, when the quaintly named Diana FC and Sport Club Dianese played locally. Like many clubs, these two did not survive the Civil War, and Denia was without a senior team until 1953 when Cofradía Pescadores Dénia Club de Fútbol, or Denia Fishermans Guild FC was formed. Competing in the Valencian Regional leagues, the club made moderate progress and changed its name to Club Deportivo Denia in 1959.
During this period the club played its home matches at Camp del Rodat, a tight little ground, surrounded by housing in the middle of town. They continued to play on its dirt pitch until the move to the Camp Nou Denia in 2002. The dirt has been replaced with a synthetic surface and is now home to the reserve side, but little else has changed. The Camp del Rodat saw four promotions to the Tercera in the 47 seasons it was used by the first team, but with the exception of second place in 1990-91, Denia usually struggled for a few years in the Tercera before inevitable relegation to the regional league. By the time the club returned to the Tercera in 2002, they had decamped to the . The new ground was purpose built in 1995 on the western edge of town for CF Atletico Deportivo Denia, but when they went belly up at the end of the 2002 season, CD Denia moved in.
Initially, CD Denia enjoyed its new surroundings, making steady progress and winning the Tercera and the subsequent play-offs in season 2006-07. The club had a series of steady finishes in Segunda B since promotion, with a high of fifth in 2009-10. A more difficult season was endured in 2011-12, and as funds and results dried up, Denia stumbled home in fifteenth place. Worse was to follow, as the club's failure to clear the wage bill saw it demoted to the Tercera in July 2012, bringing an end to five seasons in the third tier.
The is a functional and rather plain affair. It has a capacity of 3,000 with 1500 seats, most of which are located on the west side of the stadium, some of which are under a basic cantilevered roof that straddles the half way line for 45 metres. And that’s it. There is space for development, and with a population that has nearly doubled in size to 40,000 in the last 20 years, the local council might have considered expansion, had CD Denia's world not imploded in July 2012. 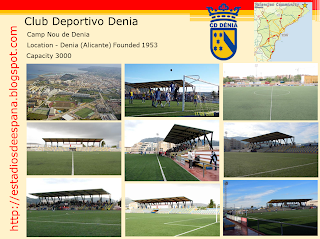