Football in has always been a low-key affair. Prior to the Civil war, the local teams rarely played far afield, and when in 1943, the Spanish Federation wanted a team from to represent the province in the reformed Tercera Division, there were no takers. It wasn’t until a dissident section from ’s senior team, CF Cuenca, broke away to form Union Balompedica Conquense in 1946, did any club play in a league outside the province. Not that their progress was stellar. In the succeeding 52 seasons, Conquense played just one season, 1987-88 in Segunda B, the remaining years were spent in the Tercera or below. Then in 1998, they won promotion after topping the play-off group that contained CD Linares, CD San Roque de Lepe and CD Badajoz B.
Cuenca is a bit of a backwater and because of its central position, UB Conquense get moved around the four different divisions of Segunda 2b, depending on the overall geographical make up of the competing teams. So it’s to their credit that they have played at this level for 12 of the past 13 seasons. 2004-05 saw the clubs only appearance in the promotion play-offs, when after beating CF  over two legs, they faced two matches against Real Madrid B for a place in La Segunda. On 18 June 2005, La Fuensanta was full to its 5,000 capacity, temporary seating having been placed in front of the main stand and behind the east goal. Unfortunately, the team from the capital were 0-2 victors, but the following weekend back in , Conquense salvaged some pride. The match was switched to the Santiago Bernabeu, and in front of a record crowd for a Segunda B match of 61,000, Conquense won 1-0. Not enough to secure promotion, but mighty close.
La Fuensanta has been used by the club since its formation back in 1946. Until May 2011 it had an oval layout, but that did not present the usual viewing problems associated with such grounds, as spectators were confined to the two stands on either side of the pitch. That all changed in the close season when the pitch was rotated 90 degrees and the old main stand on the north side of the ground, became an end stand. This is a bright cantilevered enclosure dating from the 1970’s and has a capacity of 1600, the front row of which is eight feet above pitch level.
Opposite was possibly the narrowest stand in . Dating from the early 1990’s, there was room for just two rows of seats. They stopped either side of the halfway line for a set of access steps that led to a TV gantry, which sat atop of the roof like a prison watchtower. This didn't survive the remodelling and the focus of the new ground is a full length stand on the west side. It consists of a single tier and a cantilevered roof with oak beams, similar to the stands found at Zamora's Ruta de la Plata. The first match at the redesigned stadium was against Real Madrid Castilla on 28 August 2011 and seats were installed to the open east side in the days before the match. The south stand was the last to be finished in October, taking the new all-seat capacity up to 6,700.

Unfortunately, Conquense's new surroundings did not have the desired effect as the club struggled throughout the 2011-12 season. The club won just two of its first 24 fixtures, and whilst late season form improved, Conquense finished 16th and entered the relegation play-offs. Here they were paired with Real Zaragoza B, but the Aragonese were themselves on an excellent run of form and won the tie 0-4 on aggregate. As a result, Conquense and La Fuensanta returned to the Tercera for the first time in six seasons. Finishing second, the club successfully navigated the play-offs and returned to Segunda B for the 2013-14 season. 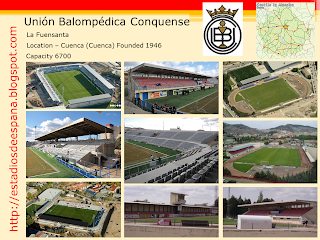