Zafra has a population of 15,800 and lies in the deep south of Extremadura, around 85 miles north of Sevilla. The local team, Club Deportivo Diter Zafra was formed in 1930 and has spent 8 seasons at Segunda B level, four in the late 1970's and another four in the early 2000's. Diter Zafra dropped to the Tercera in 2006 and struggled, even spending a year in the Regional Preferente in 09-10. Now back in the Tercera, the club has clocked-up a series of top ten finishes, but a return to the third tier continues to elude them.
The Nuevo Estadio de Zafra was opened on 1 June 1972 with a friendly against a Real Madrid XI. It was all open bench seating back then, but the main stand gained a new roof in the early 1980's and the enclosure has remained pretty much unchanged since then. Owned by the municipality, it has a capacity 5,000 with a 25 metre cantilevered stand on the west side of the ground. There are a few bucket seats in the central area for the club's officials, whilst the oi polloi make do with some concrete benches-come-steps.
The concrete bench/step combo is continued on either side of the stand, whilst the east side is made up of seven rows of blue & white concrete bleachers. With two narrow strips of hard standing behind each goal, the Nuevo Estadio de Zafra is the quintessential fourth tier stadium. You can follow the ups & downs of Diter Zafra at this excellent official website. 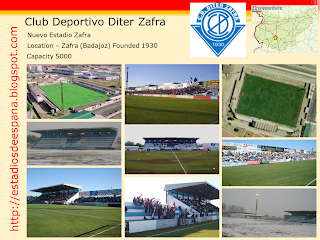