The summer of 1992 was not a good time for Villanueva de la Serena, a town of 25,400 inhabitants 65 miles east of the regional capital, Badajoz. CD Villanovense, the town's senior club since formation in 1951 had just been relegated from Segunda B and with debts of 16 million pesetas, called it a day. Luckily the football loving residents of the town found refuge in the newly formed Sport Club Villanueva, who started life in the Regional Preferente. By 1996 the club reached the Tercera, which is where they have played the majority of their football since. In 1999 the club adopted the title of Club de Fútbol Villanovense and took on the green & white colours and the crest of the former team.
Up to the start of 2011-12, there has been three season-long sojourns in Segunda B, the first coming in 2003-04. After dominating Group 14 of the Tercera in 2010-11 and winning promotion with a 2-1 aggregate play-off victory over Andalucians Comarca de Níjar, Villanovense enjoyed their most successful season in Segunda B, clocking-up 55 points to finish in ninth place. Unfortunately, 2012-13 was less successful and after finishing in 16th position, the club endured the agony of losing in the relegation play-offs to Zamora.
Villanovense play at the Estadio Romero Cuerda, which was opened in 1976 and is another municipally owned stadium with an athletics track around the pitch. It holds 6,500, with around 1,500 seats, 400 of which are under the ground's only cover on the west side of the stadium. Pleasant, but unremarkable. Find out more about this land-locked club with a mermaid on its crest here. 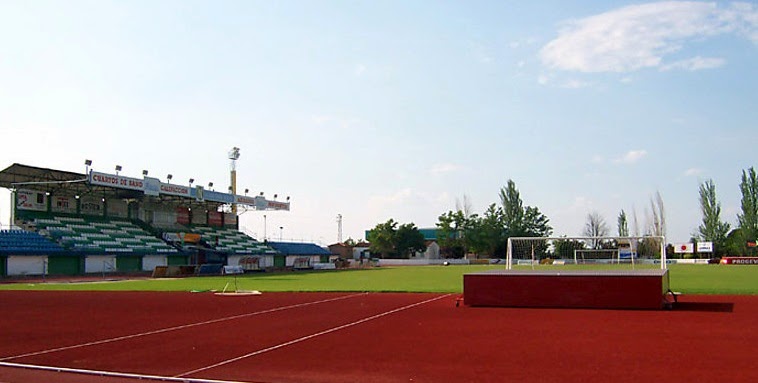 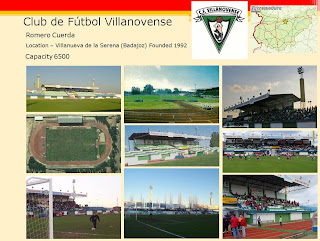