Naron is a suburb of 35,000 people on the northern outskirts of Ferrol. The local team, Narón Balompé Piñeiros were formed in 1996 after two clubs, U.D. Piñeiros and Futbol Sala Narón merged.
They graced the Tercera for the better part of a decade, even reaching the play-offs in 2007-08 to the play-offs, where CF Antequera got the better of them. However, two successive relegations, now sees the club plying it's trade in level 6 of the Spanish pyramid. Their home is the Municipal Rio Seca, which opened in 1999. Unfortunately it is a tad formulaic. Short cantilever stand? Certainly Señor. How about one of those orange athletic tracks? You betcha. And that, in a nutshell is the Municipal Rio Seca. 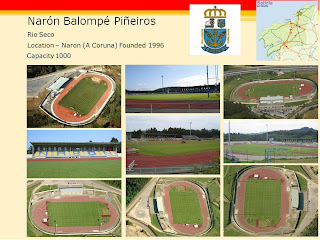