Formed 1942  when Juventud Espanol and Melilla FC merged, Union Deportiva Melilla found almost instant success when winning Cup of Morocco in 1943 and the Moroccan league in 1944, which earned the club a place in the Tercera. On 29 September 1945 Estadio Alvarez Clara was opened with a match against Atletico Madrid, or Atletico Aviacion as they were known back then. At a cost of 4 million pesetas, it featured a full length cantilevered stand and had an overall capacity of 12,000.
UD Melilla continued to make rapid progress and reached La Segunda in 1950-51. Football in the Spanish Protectorate of Northern Morocco was particularly strong at this time, with Atletico Tetuan and SD Ceuta also in the division, and Hispano de Tanger having appeared in La Segunda during the 1940’s. However, the exhilaration of reaching the second flight was curtailed by tragedy. On 26 January 1951, the club was travelling to its away fixture with Real Mallorca. With flights cancelled, they had taken the ferry to Malaga and were making their way by road to Alicante, to catch another ferry to Palma. Just outside the town of Loja, 35 miles west of Granada, the coach carrying the team was struck by a lorry and 2 players and the club’s physiotherapist were killed. The Spanish Football nation was in shock and benefit matches were played for the families of the victims, including one at the Mestalla, where Valencia played Barcelona.
The team survived the season, finishing in a respectable tenth place. Three further seasons in La Segunda followed, with a fifth place finish in 1952-53, but by the end of the following season the considerable cost of running the team was taking its toll and they were relegated. UD Melilla struggled on for another year or two, but along with the money, the club had lost its heart, possibly on that road outside Loja, and at the end of the 1955-1956, it folded.
The next team from Melilla to strut its stuff at a national level was Melilla Club de Futbol. Founded following the demise of UD Melilla in 1956, they too progressed quickly through the regional leagues and won promotion to the Segunda in 1962, beating Albacete Balompie in a relegation/promotion play-off. The following three seasons saw Melilla CF avoid relegation by the skin of their teeth, finishing either a point or a place above the relegation play-off berths on each occasion. The drop finally came at the end of the 1965-66 season, when they finished fifteenth and seven points from safety.
Melilla CF carried on in the regional leagues until folding in 1976. During the summer of 1976, the directors of two other clubs from Melilla, Gimnastico & Sociedad Deportiva Melilla, merged their teams and took on the name of the town’s most famous club, Union Deportiva Melilla. The new team took over the place of SD Melilla in the Tercera, and gradually, over the next decade progressed to the point where it won promotion to the Segunda 2b in 1987. And there it has remained, clocking up 24 seasons at this level. There have been 3 visits to the play-offs, and one relegation fright, when they overcame SD Beasain in a relegation play-off in 2002.
Estadio Alvarez Clara has remained relatively unaltered over the years, except for the odd lick of paint here and new seats there. The main stand would have looked smart in a sort of utilitarian way, when UD Melilla graced La Segunda. Now I find it interesting, not because of the design, but where it is. It is essentially caught in a time warp, a relic of the 1950’s, not unlike Melilla itself. 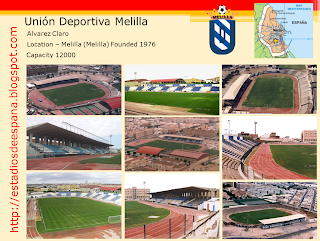