CF Montañeros completed a remarkable transformation from the Mountaineering Association of the Sacred Heart, a youth scout organisation formed in 1968, to a team that held its own in the third level of Spanish football.
The football section was set up in 1973 and continued as essentially a series of youth teams until a senior team was formed in 2002. In 2004 the club was playing in category three of the A Coruña regional league, but four successive promotions saw them reach the Tercera, and after a second place finish in 2008-09, CF Montañeros played Hellin CF in the play-offs. A 0-1 aggregate defeat appeared to have ended their chances of promotion, but the demise of Ciudad de Santiago in the close season, saw the club promoted as the next best placed club from Galicia. They may have entered Segunda B through the back door, but CF Montañeros ensured that they would not make a quick exit back through it. A respectable tenth place finish in 2009-10 and impressive victories over soon to be promoted SD Ponferradina and play-off bound  Pontevedra CF, showed the league that the club had arrived and intended to stay.
The Campo A Grela was used for home matches in 2009-10. The ground in the south of La Coruña features a full-length stand with a cantilevered roof and that is about it. The other 3 sides of the ground are made up of an office block, a warehouse and a line of conifers. The club also used the athletic stadium in the suburb of Elviña for a few matches after problems with the pitch. ﻿﻿The club moved their home matches to Campo Elviña Grande, a sports complex around a kilometre south east of A Grela at the start of the 2010-11 season. It’s another single sided stadium, with a cantilevered stand that runs along the east side of the complex and an all weather pitch.
A respectable twelfth place was attained in Segunda B in 2010-11, but their third season in the third tier proved to be a campaign too far. Struggling financially, Montañeros finished in 18th position and seemed destined to return to the Tercera. However, the club took the decision to disband its senior team after a decade of success, and return to its roots to concentrate on youth football. 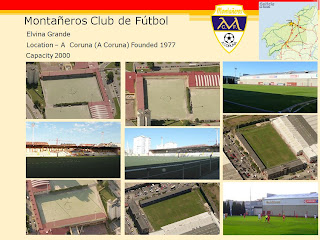