El Mundo del Fútbol is the training academy of Galicia’s leading football club Real Club Deportivo La Coruña. Situated 12 miles south east of La Coruña near the town of Abegonda, the facility consists of 9 full size natural pitches and one all-weather surface, all identical in size to the pitch at the Riazor. Contained within the main hub, a large elliptical shaped building at the southern end of the complex, are offices, changing rooms, gymnasium, press room, treatment rooms and a cafeteria.
The building also features seating on two sides.  500 seats are situated on the southern side and are directly behind the goal of the all-weather pitch.  On the northern side of the hub is a substantial 1200 seat stand than runs the length of the main pitch and this is home to Deportivo B. Apart from a few games at the Riazor, usually play-offs or matches against Galician rivals, this has been the team’s home since 2003. The background of Deportivo B is rather convoluted and too lengthy to cover here, however all is explained on this link to the club’s official website. The team has spent the vast majority of its time in the Tercera, but since the mid 1990’s has made regular visits to Segunda B.
El Mundo del Fútbol is the modern approach to reserve team football for larger clubs. Gone are the days of regularly playing on first team pitch or borrowing the pitch of a smaller club. If it’s done as well as at Deportivo La Coruña, then it’s a step forward. 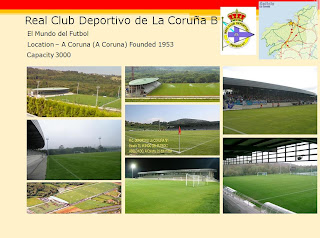