Formed in 1931, as Club Recreativo, Granada spent the first three seasons playing at Campo de La Tablas, a basic, barely enclosed ground. In their final season at La Tablas, Granada gained promotion to the second division. Work started on a new ground in 1933 on a plot of land in the north of the city just over the road from the Plaza de Toros. “Los Cármenes” would cost 110,000 pesetas and was officially inaugurated on 23 December 1934, with a league match against Malactiano (CD Malaga). The home side prevailed by two goals to one.
The new ground was a basic square stadium, uncovered in all four sides. A small seated area for the club officials was on the southern side, which also housed the changing rooms and offices. The civil war ensured that any national leagues would be put on hold until 1939, but when footballing hostilities resumed, Granada CF as they were now known, finished runners-up in the second division missing out on the promotion play-offs by a single point to Cadiz.  They did not have long to wait however, as promotion was gained the following year via the play-offs. Over the next 25 years, the club had 3 spells in the Primera, none of which lasted longer than 4 seasons. However they did reach their one and only final of the Copa del Rey in 1959, losing 4-1 to Barcelona at the Santiago Bernabeu.
Granada CF’s most successful period in the Primera commenced with promotion at the end of the 1967-68 season. Los Cármenes underwent its only significant facelift with the building of a new two tiered stand on the southern side of the ground, which was inaugurated in 24 November 1968 with a 2-0 victory over Malaga. In keeping with the rest of the ground, the stand was white and very basic, with the roof supported by thin pillars set three rows from the back. Somewhat startling was the fact that despite running the length of the pitch, it only had two narrow vomitories(exits) on the upper tier. This excellent video has been put together to celebrate the clubs eightieth anniversary and includes excellent footage of Los Cármenes.
The club remained in La Primera for a further 8 seasons, achieving two sixth place finishes in 1971-72 and 73-74, remaining unbeaten at home throughout the 71-72 season. Over the next 20 years or so, the club flitted between the second and third levels, never getting close to a return to the top level. By the mid 90’s Granada CF was a permanent fixture in Segunda 2b and the decision was made to leave Los Cármenes for a new stadium in the south of the city. A new stadium means new revenue and extra impetus, the plan couldn’t fail... The last game at the stadium was a 1-1 draw with Sevilla B on 21 May 1995.
The national team has staged two full internationals at the stadium. Cyprus were the first visitors in 1971, and they were sent packing with a 7-0 defeat. Next up were Mexico, who lost 2-0 in 1978. Los Cármenes also staged a B International. On 25 March 1981, Spain played England and won 3-2. With the exception of the building of the new stand in the late 1960’s, Los Carmenes remained relatively unaltered and unadorned throughout its 60 years as a football ground. It had the indignity of being used as a car park for a few years before being demolished in the late 90’s. The site is now a covered in apartments, but at least the ground is remembered on Calle del Granada Club de Futbol, which runs along the northern perimeter of the old ground. 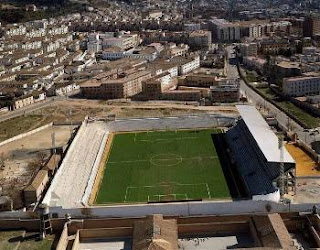 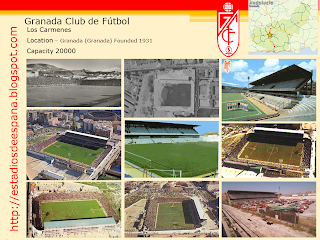 Labels: Andalucia, Gone but not Forgotten