Okay, I admit that a bit of a pattern is developing on this tour of the Badajoz region. Stadium owned by the Municipality, athletics track, small stand, yada yada. Well, the formula is continued here in Don Benito, a town of 36,000 inhabitants, just a few miles west of Villanueva de la Serena.
Resident club, Club Deportivo Don Benito was formed in 1928 and like their local rivals Villanovense, has spent almost all their career at Tercera level. There have been 3 season long visits to Segunda B, the first in 1988/89 and the last in season 2004/05. In total, Don Benito has reached the end of season play-offs on 16 occasions, they have however, a dreadful record. Their victories over CD San Fernando & CP Granada 74 at the end of the 04-05 season, is the only time they have successfully navigated the play-offs to reach the third tier.
The stadium was built in 1957 and inaugurated on 10 September with a match against Atlético Madrid. A short cantilever roof was added to the main stand in 2001. It’s a tidy little stadium, and not nearly as tired looking as say Diter Zafra's or Villanovense's stadiums. All very pleasant. 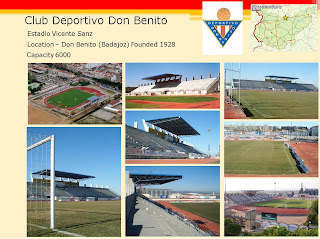