This is the story of CD Badajoz, one of the oldest clubs in Spain and probably Extremadura’s most consistent team, having spent over 20 seasons in the second division. Despite some near misses, it  never made it to the Primera, and after a decade of under achievement, the grim reaper paid a visit and the club ceased to be.
Founded in August 1905, the CD Badajoz played at three grounds within the city before settling at El Vivero. Opened in 1917 and situated north of the River Guadiana which runs through the centre of the city, El Vivero saw second division football as recently as 1998. It was basic, quirky and dog-eared, but it had character and history. For it was here that CD Badajoz won promotion to La Segunda for the first time in 1953. They stayed in the second tier for seven seasons, before returning to the Tercera in 1960. Two further, season-long visits to La Segunda  occurred in the sixties, before the club endured a 25 year-long spell in the Tercera and Segunda B.The only cover was found on the south west side of the ground and this was only a short 25 metre cantilevered cover, which was erected in the sixties. The remain three sides were open terracing, with the south-east end featuring a larger "kop" behind the goal.
CD Badajoz finally returned to La Segunda in 1992 and El Vivero continued to serve as the club's home stadium until 22 November 1998. The final match at El Vivero saw Barcelona B defeated by a single goal, scored by Sandro. Work had commenced on a new stadium to the west of the city in September 1997 and it was clearly designed with La Primera in mind. El Vivero was kept open by the local municipality until late 2009, when a 4.8 million euro development saw it replaced with a smaller, more modern one-sided stadium and a sports centre.

Estadio Nuevo Vivero is the largest stadium in Extremadura with a capacity of 15,598. Situated on the south bank of the Guadiana, about a mile to the west of the city, it was built at a cost of 4.5 million euros with funding from Extremadura’s regional government. Results in the mid-1990's had been promising, with the final three seasons at the old El Vivero ground seeing the club finish in sixth position. Unfortunately, that dream of top flight football never quite came off and after spending beyond their means, particularly in the early 2000’s on a host of Argentinian players, CD Badajoz nearly popped its clogs. In a last minute deal in July 2006 with the President of AD Cerro de Reyes, their debts were paid-off, but they lost their place in Segunda B to his club. Very Faustian!
The Estadio Nuevo Vivero saw its first competitive match on 6 December 1998, with the second division tie against CD Toldeo. The stadium sits on the edge of a development of a series of sports facilities, of which the municipality is rightly proud. It is a bright, modern, if slightly formulaic stadium, featuring a single tier of blue seats. The cantilevered roof on the west side of the stadium is impressive, snapping on to the supports like a giant white lid. The Nuevo Vivero was one of the stadiums included in Spain's unsuccessful bid to host the 2018 World Cup. That would have seen the stadium increase to over 35,000, which bearing in mind Badajoz struggled to get a tenth of that, does seem ridiculous. It has seen international football however, when it hosted two full Spanish internationals, an 8-0 thrashing of Cyprus in 1999 and a more restrained 4-0 victory over Liechtenstein in 2006.
Following four seasons in the Tercera, CD Badajoz was promoted back to Segunda B for the start of the 2010-11 season. It proved to be a false dawn, for after two mid-table finishes, the club was wound-up with debts of over €8m. Badajoz's football fans had to content themselves with Tercera division football and the exploits of UD Badajoz at the rebuilt Estadio Viejo Vivero, whilst the Nuevo Vivero lay empty. Then in the summer of 2013, UD Badajoz joined forces with Badajoz CF , who had emerged from the remnants of the old CD Badajoz, to form Badajoz Club de Fútbol. Got that? Well all you need to know is that the new club now resides in the spacious surroundings of the Estadio Nuevo Vivero. 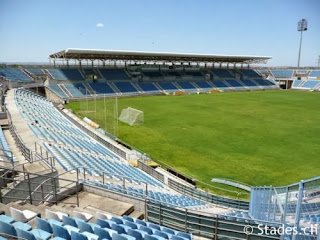 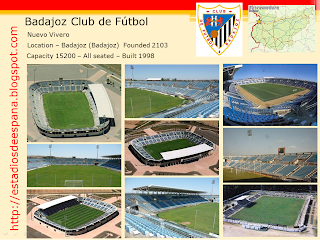