Arteixo is a small town of around 27,000 inhabitants, situated on the Rio Arteixo around 10 miles south west of . If you follow the river as it meanders along the valley towards the white sands of Playa de Sabon, you will see that it flows under an ancient Roman road at Ponte Dos Bozos. 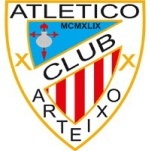 The municipality built the local Campo de Futbol within metres of the bridge and named it after the historic crossing. Of course, they could also have named it after the petro-chemical factory, the tin & zinc processing plant or the factory of one of ’s largest clothes manufacturers, who are all within a short goal kick of Atletico Club Arteixo’s home ground. I think they were right to go with the bridge, don’t you? AC Arteixo was formed in 1949 and for practically all of their history, has played at or below the sixth level, which is VERY regional. Then, in 1997-98 they reached the Tercera, and after briefly dropping back to the Preferente for a couple of years, returned to the Tercera in 2001. After a couple of steady seasons, the club won promotion to Segunda 2b at the end of 2003-04, beating a down-at-heel Real Oviedo in the play-offs.
The 2004-05 season was a struggle with just five wins that saw them finish in last position in the league, 18 points from safety. To cap it all, they were unable to pay the players salaries and the Spanish Football Federation sent them down a further level. Now back at level six, after a further relegation in 2006, AC Arteixo’s Ponte Dos Brozos ground is a very smart set-up. The main pitch has a 50 metre cantilevered stand on the west side and a smaller covered stand behind the north goal. At the back of this stand, conjoined for 25 metres or so, is the main stand for the all-weather pitch. Finally, to the south of the main pitch, is another all-weather pitch. The main campo de futbol has a capacity of 2500. Here are some more pictures of the stadium and industrial hinterland here. 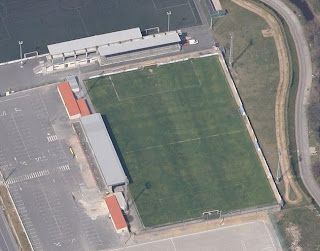 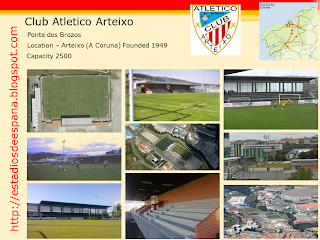